Last week I had the blessing to be in Tulsa, Oklahoma to participate in the consecration (or ordination) service for the newest bishop for my denomination.  The service was very beautiful and one I won’t forget.  Even as I sit and write this a week later I can still sense the ripples of what I experienced that evening.  I want to try to paint a picture of it for you…

The nave (sanctuary) of the parish is done in darker, neutral tones.  It is a more-or-less rectangular room with the chairs in a fan-shape around a small, elevated altar area.  The center part of the wall behind the altar is a projection screen, from ceiling to floor.  Images, song lyrics, and the parts of the liturgy will flow across it throughout the evening.  The band is positioned on the floor, stage right of the altar; the lectern is positioned on the floor, stage left of the altar.

The congregation was seated, the bishops and the ordinand (the one being ordained) were lined up outside the nave, and the amazing band (which I heard practice that afternoon!) was poised.  At the appointed time the lead archbishop stood in front of the congregation in full robes and gave them a brief synopsis of the service.  After the archbishop’s brief “disclaimer,” the service began in earnest…

…with the “Prelude” from J.S. Bach’s Suite No. 1 in G major for unaccompanied cello!  Imagine the sheer delight in the spirit of this musicologist bishop!  I caught a glance at my wife (who was acting as the coordinator for the service) and she had a huge smile on her face.  She looked at me and I returned the large grin!  I leaned against wall, closed my eyes, and began to breathe in the beautiful sound that was emanating from the adjacent room.  I know the “Prelude” isn’t a long piece, so I soaked it in.

When the final strains finished reverberating in the nave, the worship leader invited the congregation to stand and direct their focus to the Lord.  The band led into my favorite hymn, “All Creatures of Our God and King,” and the processional began!

The bishops and ordinand followed the processional cross and the Gospel book to the front of the nave, took their positions on the front row, and joined the congregation in singing.

The various portions of the liturgy flowed smoothly from one section to the next.  It was a delightful ballet of Scripture, prayer, action, and song.  The four Scripture lessons were read by friends of the ordinand.  The “Prayers of the People” litany was offered as a song.  The archbishop’s homily called us to unity – to focus on the things that unite us as the Body of Christ.  Following the homily, the ordinand prostrated himself before the altar for a time of prayer.  The band played instrumentally a first, later adding in the lyrics, which focus on a death to self and life in God.  Afterwards, he knelt before the bishops, who laid their hands upon him and asked God’s blessing upon the ordinand and to make the ordinand a bishop in the Church. 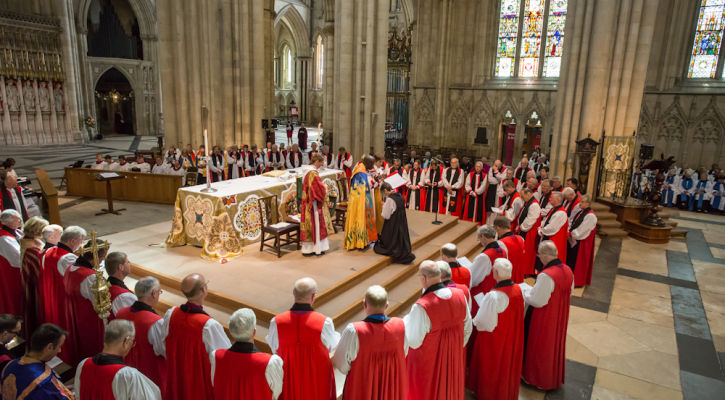 After the formal prayers, several of the bishops offered extemporaneous prayers for the ordinand, some praying in tongues (we are a charismatic denomination, after all!), others adding their agreement by saying, “Amen.”  Following this time the bishops invested the newly-ordained bishop with the robes and insignia of his new office.  The freshly-minted bishop was then greeted by applause from the congregation.

The Eucharist was truly a time of thanksgiving, both for the redemptive actions of Jesus Christ and for the life and ministry – past, present, and future – of the new bishop.  The evening was a joyful celebration and one in which I am very grateful to have been a participant.

Now, comes the question: Why have I told you all of this and what does this have to do with ancient-future and/or worship?

So, there we were – a group of people who came from a variety of Christian traditions, backgrounds, and ethnicities – following an ancient Christian tradition of calling and setting apart one of our own for the service of God in a nave that used cutting-edge technology, singing songs that span twelve centuries of history, raising our hands, bowing with reverence before the altar, dancing and swaying, and praising the name of the Triune God!  Bishops and hipsters, stay-at-home moms and techies, white-collar business people and blue-collar workers – all offered thanksgiving that night…and it was wonderful!

When we bless the ties that bind and cast aside those things which so can weigh us down and cause division (Hebrews 12:1) we will experience the manifestation of the presence of God in our midst.  This can happen in cities and countrysides all around the world.  The question I pose back is: Will we join in this endeavor?  Will we harness guitars and robes, ancient hymns and modern choruses, written prayers and extemporaneous petitions,  coffee shops and cathedrals to do it?  Will we utilize the ancient in the present to call forth the future?  (For more, see “Ancient-Future Worship“)

Remember: It’s not just about music and orders of service – it is about a lifestyle, a living, breathing spirituality, that will bring us closer to God and each other, as members of the Body of Christ.

The Lord be with you… 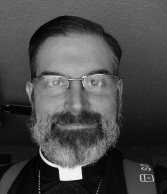 Bishop Ryan Mackey is a contributor for TalkingWorship.com.  Mackey is Professor of Music History and Technology at Central Christian College of Kansas and an Auxiliary Bishop in Province USA of the Communion of Evangelical Episcopal Churches.  His passions include teaching on and incorporating the historic traditions of the Church in contemporary practices.

One thought on “A Manifestation of Ancient-Future at an Ordination”